We are all brothers and sisters… 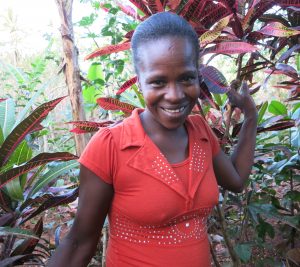 “We need to remember we are all brothers and sisters here; we are all Haitians. We all deserve to live together and it takes all of us to live without violence.” Amide

Kristin: Lee tells me you are President of Fum la kai. Thank you for helping women in your community.

Please tell us about Fum la kai, & what inspired you to start it.

Amide: There was a woman in the area who had an abusive husband, it was going on a long time. At one point because the people here had found out about the abuse the husband said he would take her and move her to Port-au-Prince so no one would know where to find her. She ran away from home and came to me and some other friends to gather together to protect her. Eventually we were able to get a group of women together to get her out of the house. We got the police involved and the husband was arrested. Once that happened we decided we needed to protect ALL the women in the community so we decided to work together.

The first time he beat her some of us took her to the hospital for treatment and tests. There we were told about a group in Jacmel for the rights of women and we learned from them how to take legal action and after that we formed our own group.

Now we’ve gotten to a point we are a place people feel safe to report violence against children as well. And we are doing our best to protect the children, too. People know that if they are violent towards a woman or a child they will probably get reported to our group. And our group isn’t afraid to get the Police involved.The Police support us.

The men need to understand the impact of their actions. We bring the man in front of the group to speak to him about how abuse is not the right way to treat another person. We see the importance of speaking to him about his actions because once a person does this if they continue to walk around without knowing what they’ve done to the victim who is in trauma that is no good. We are trying to bring more awareness to the issue. Awareness to the person committing the violence, that his actions are wrong and have consequences. And awareness to the community that violence is not a way to solve a problem.

We also try to do more seminars in the community to bring awareness to the reality of violence and open up the discussion of violence and protecting each other’s rights. Even with some of the members in the group, they have an argument and the men will come and approach me to help talk out the issues, rather than resort to violence so it is working.

Kristin: Have you ever felt unsafe or concerned about the men perhaps being violent with you because they know you are now reporting them?

Amide: NO. I’ve never felt unsafe, I know I have the support of local law enforcement. Even once in a while people go to the Police with problems and he will send them to us at Fum la kai for help. Several times he says, “they can help you better than we can.“ It’s cooperative. The only thing that’s happened is in the very first incident, I’ve lost a friend because I was friends with the husband too. And now of course he does not talk to us anymore.

We have 160 members in the group. Of course not every one comes to every meeting. When have an activity everyone comes. We are planting a group garden together, cabbage and peppers. We’ve prepared the land already, and are planting on Saturday.

Kristin: What one piece of advice would you like to share with Haitian women about keeping themselves safe from violence?

Amide: Some women who are involved in this group, their lives changed.  Before they never had a chance to leave the house, only taking care of their children, they didn’t know even know their rights and what actions they could take. It’s really important to get women into an environment where they can learn about their rights, talk about the issues and what they can do; what action they can take.

My advice to other women, know your rights, find a way to learn what they are, so that if something does happen you are not afraid to report it or to speak up about it.

Kristin: If you were to give advice to the men in a community or say something to them, what would you want to tell them?

Amide: I would encourage them to collaborate with the women because it takes the men to stand up for the rights of women too.

Amide smiles and our interview is complete. We hug. I thank her for a job well done. I will join them tomorrow for the Planting of the Garden. Hopefully I will know more Kreyol. 🙂

May we ALL remember we are brothers and sisters. May we ALL look out for one another, love and respect each other.