Create Your Own Possibilities. 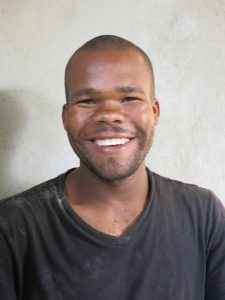 Here’s his story in his words:

I started fixing motorcycles back in 2000. I fixed flat tires, at that time I had no money for a screw driver or other proper tools, so I used a hinge from a door. One day people came with their bikes and needed them fixed, but the hinge I used as a screw driver was broken so I couldn’t fix it properly, but I tried to fix it anyway. I asked them to bring me a new hinge and one screw driver. They brought this to me and I could fix things better with the tools. I wanted to expand my business.

I have 7 sisters, one in Port-au-Prince, I asked her to get me information. She knew where to get the parts for the motorcycles. I had $2000 and I bought parts to sell to the people to meet their needs here in Mizak.

I did not ask for any money to do the repairs, I asked that the people just buy the parts from me and I will fix it for free. In other places they charge also for the labor. My marketing was very good in offering to do the repairs for free. Many people came to my house for repairs because I fixed for free. At some point I had no more parts, I used them. For one week I had nothing to sell. So I went to Port-au-Prince (PAP) and bought more and sold those parts too. And I kept buying more and selling more. I did so well that in PAP they gave me credit to buy the parts so I could buy even more. Then I had enough for a few months at a time. When I had profit I bought all parts for motorcycles.

I was still in school. School is a tool of success. When I went to school, I offered rides to teachers, I found other passengers to give rides and I stayed in school myself and took my classes.

When I was in 2nd level, I didn’t pass the national exam at first, but I continued with classes. And I kept working on repairs and then took the test again.

Eventually I passed and in 2010, I went to university in Jacmel.

And then the earthquake hit. It was the first time I saw a catastrophe like this, I was on the 5th floor. I was with my brother and four of my friends. The four friends died. When the roof fell, only the desk I could see, no light. I saw the light in the windows. I thanked God I was alive. I thought my brother was dead. I said, “Gaby, did anything fall on you?” He said “No.” He didn’t realize a part of the wall fell on his foot, but he was able to pull his foot out of his shoe. I saw the light. We needed to go to the window and pass up to the roof. We have a friend Peter who lost his leg. We tried to get him out. When we were outside we saw some other students were hurt and we used the motorcycles to take them to the hospital. (They were able to help dozens of people that day, thinking not of themselves only of helping as many people as they could get to medical care)

After the earthquake I continued to make money fixing the bikes and I went to Jacmel and I opened a bank account. The money I made I put into the acct. I would change Haitian money to US for people. I had $5K US. I knew in my dream I could buy a truck. One day I went with my brother Titi. I told him I needed a new truck. I bought the truck even though my brother told me the price was too high. He I should have bargained. But I said, “NO this is My truck!”  I got into an argument with him about the cost, he was so upset he would not even come with me all the way home, but I bought the truck.

I drove myself home in my new truck. I learned to drive it right then and there. I practiced. We have the market here in Mizak and people needed to go to Jacmel with their goods. They were traveling all the way there with their donkey carrying the goods. Once I went to Jacmel, I said, “I have a truck, and I can help you carry, you don’t need to use the donkey. The truck is much faster than a donkey. If you use the truck you can arrive early to Jacmel you can sell more.” I took people to the market and people to Jacmel. Every afternoon. I built this house with the money I made from the truck and giving rides to all those people.

(Tigo now pauses and points at the house he is building which is quite impressive: it has a walled in tiled porch, two large rooms off to each side with curved walls and windows, a large kitchen, an indoor bathroom, bedroom, dining area. The house is large for Haitian standards.)

Tigo continues…. Some day in my dream, I want to make a gallery on the porch. I am building a big room too. I have more work. One day I met the boss and I described to him the house I want built. He said, “that would be pretty.” And we build it, little by little. The rooms. I have more work with repairing motorbikes and providing transportation with my truck and I use the profits to keep building the house. Every plan I give to the boss, he likes it and builds it for me.

Lee is my friend. He said, “Tigo I have a friend in PAP, he needs a ride.” I gave his friend the ride and in PAP I saw a machine to make bread (to knead the dough.)  After I saw it I was in Mizak at the old market and I saw 5 people, “what do you need?” I asked them. “I need some bread, I don’t know where I can buy it.”  So I think, what can I do? I need to pick up the machines to knead the dough. The man selling asked for 3000 Haitian for it, it is expensive, I could not afford it. But I spoke to the people and they had experience in baking. They said, “it is not expensive, good price.”  Bread is something people need. Each morning they need it to eat with their coffee.

At first when I had machines, I didn’t know how to use them so I asked the people for information on how to use them. I went to Jacmel to find the information about making a bakery for the people. Many of the bakeries were too big and I had small space, I didn’t yet have all the different items needed. It was complicated. But then I found one small bakery in a small house and I asked the owner if I could look inside, then I could figure out how to do the same on my own. The owner allowed me to look and then I came back here and understood how to make the bakery in Mizak. I bought 2 ovens now 5 people work there.

To realize your dream, you need to make sacrifices. I don’t have time to sleep. Sometimes I wake up at 3 or 4am to use my truck as a taxi. If you need to realize your dream, when you make sacrifices you need to realize you will need to work hard, sweat a lot, get dirty. If you are ok to work hard, you know that later you can put nice clothes on and relax and find the reward. It does not come without hard work. Life is made out of creation, if you get to a place where you think there are no options you need create your own possibilities. Even if you finish school, you need to create your own path.

Kristin: If you could tell people outside one thing about Haiti you want them to know what would that be?

Tigo: When Haitians leave they think Haiti is bad. Then they come back and this Haiti is not so bad. It has sun and beaches. Haiti is natural. We don’t have big industry. Example,  when you look at chickens you can buy a Haitian chicken or an imported. You can see the difference, Haitian in natural. You can see it. That chicken is not filled with chemicals, it eats only from nature. It is the same way with Haiti, we are working to create our country out of what we naturally have, we are authentic. We are creating out of what we have in nature. There is a Genuine desire for ourselves and our country, creating out of natural goods.

In the developing world sometimes people think it’s easier. If I was going to travel I always want to come back to Haiti. Yes, maybe I see all these nice buildings and maybe I think these things fall from the sky, but no, it takes everyone working together to make it happen. Things don’t fall from the sky. In developing countries people work hard for what they have. We work hard for what we have too.